Roundwood Skate Park is a 488sqm concrete skatepark built by the designers Wheelscape in 2016. The aim was to improve the local skate scene and establish skate and BMX communities through participation.

Creative researcher Leah McIntosh liked to skate, and pointed out the benefits of skating include health, both mental and physical and as a deterrence of crime.

During the Covid-19 lockdown in March 2020, the skate park was open and became a significant place for local young people to come, for fresh air and exercise. Local skaters were interviewed in October 2021, discussing their experiences and feelings about Roundwood Skate Park, and the community of skaters that use it.

What is the history of the land around the Skate Park?

The land of Roundwood Skate Park is separate but related to the main area of Roundwood Park. The history of the land is related but separate too. The field was a separate lot of land, part of the former ‘Roundwood Estate’ and near to a large house called Roundwood House. Roundwood House stood where Roundwood Youth Centre is on Longstone Avenue.

The picture shows a large house with tower and decorated chimneypots. In the foreground you can see a family playing tennis and servants mowing the lawn.

Harlesden began to built up in the 19th century, however the area of Roundwood Skate Park remained green space. 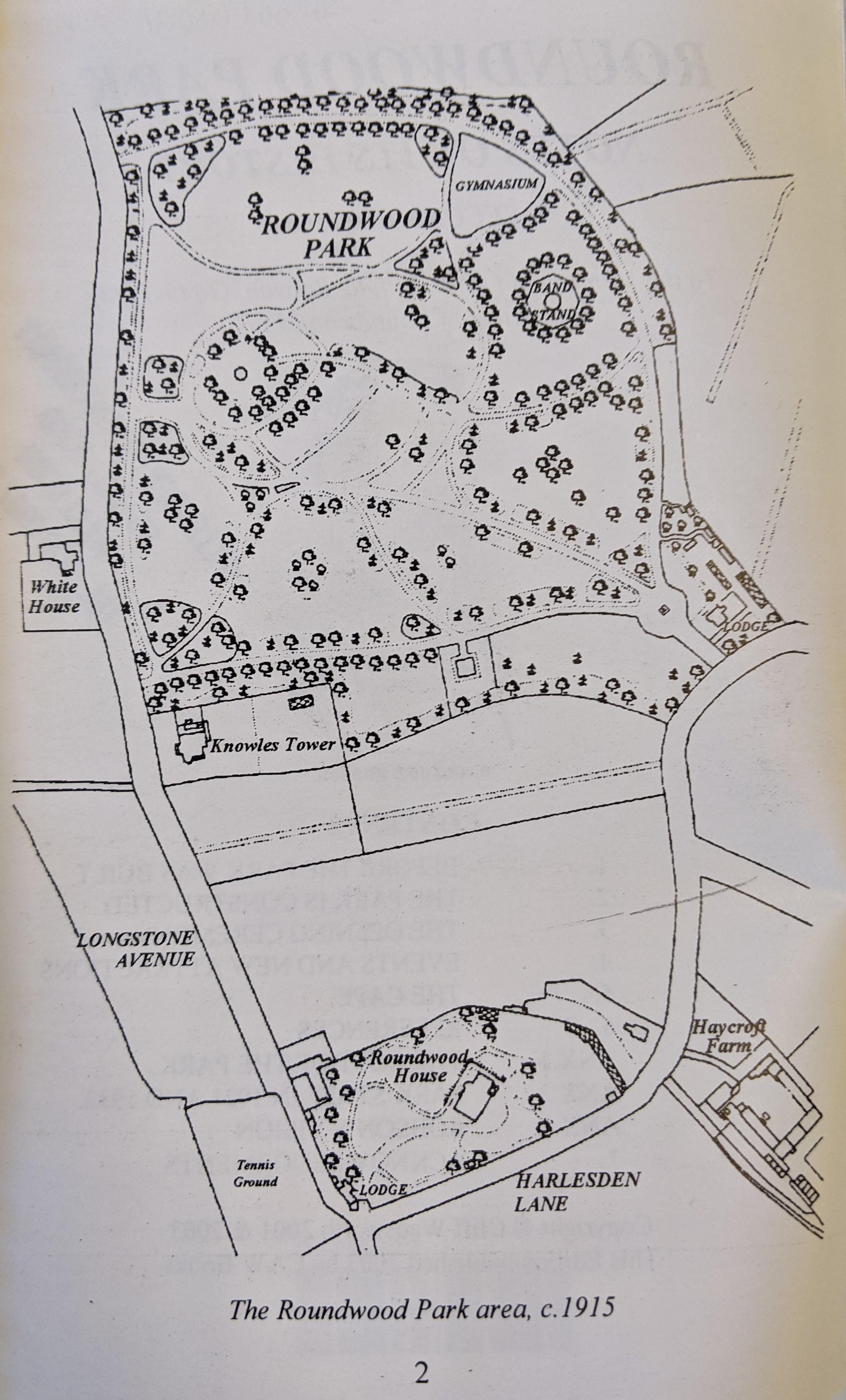 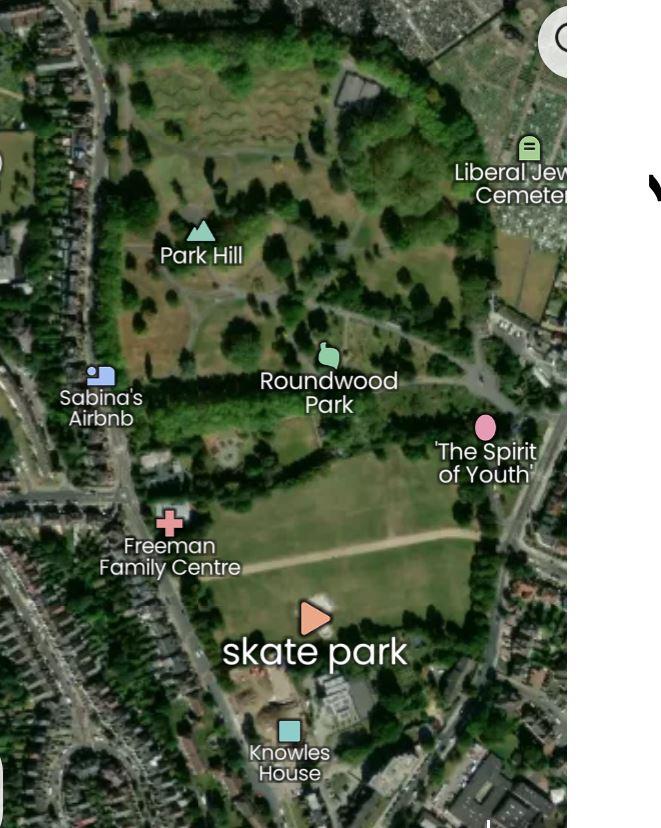 Left: Map from Cliff Wadsworth’s pamphlet, Roundwood Park, Notes on its History, from Brent Museum and Archives, LHC/1/PAR/2. The map shows the Roundwood Park area around 1915, including the area of the Skate Park, which is open fields.

Right: A screenshot of a satellite view of the same area today. Mapcarta.com, Creative Commons licensed.

What were the temporary Buildings at Roundwood?

After the Second World War large sections of London, including Brent, had been bombed. Many people lost their homes and there was a need to provide houses for people quickly. The field south of Roundwood Park was used to construct temporary homes, known as ‘Prefabs’ (Prefabricated houses), on what was then called ‘Roundwood Park Avenue’.

‘These small houses look like large sheds. The houses are detached, made of corrugated metal, and surrounded by grass, with wooden and wire fences. The roads are wide enough for cars to drive along. In this picture you can see trees in the background, which are probably those in Roundwood Park.’ 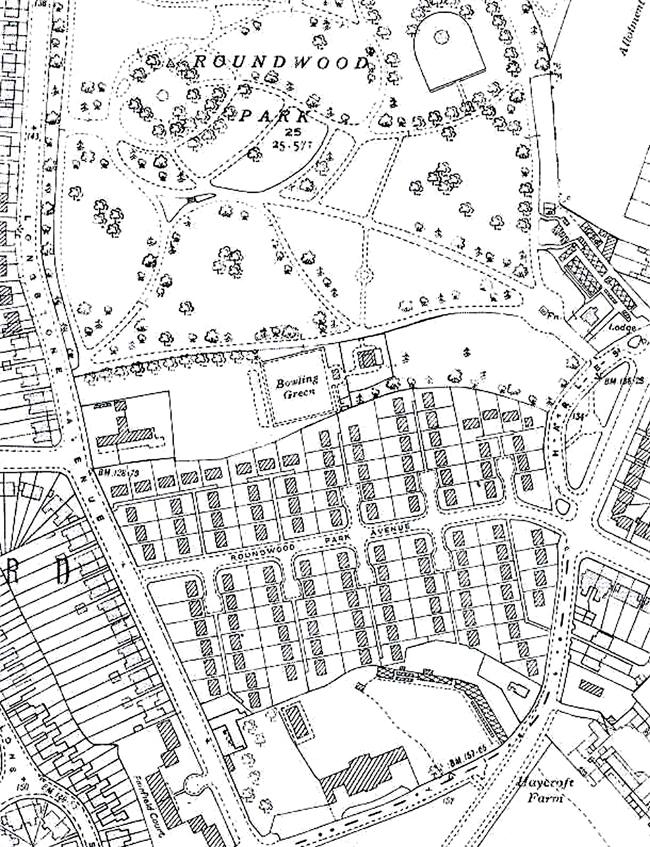 Left: Scanned image of a map showing Roundwood Park in 1959. Below the park you can see an area covered in small ‘Prefab’ houses. Image Ref: 10532, Courtesy Philip Grant/ Brent Museum and Archives. You can also see that Haycroft Farm is still marked.
Right: A screenshot of a satellite view of the same area today. You can see that the path that runs near to the skate park is actually roughly where the old Roundwood Avenue ran. Mapcarta.com, Creative Commons licensed.

As more houses were built and people were re-located, the prefabs at Roundwood were removed and the area returned to green space .

With thanks to Leah McIntosh and the skaters Malachi, David, Leonardo and Aslan.

Philip Grant, ‘Kingsbury Post-war Prefab homes’, 2019. A talk on Prefabs in the nearby area Kingsbury for the Prefab Museum

Find out about the design of the skate park here

Please also see Brent Museum and Archives webpages for more information on the history of Harlesden and Brent.