Why was the Jubilee Clock built?

In the 19th century watches and clocks were the only way to tell the time, very few individuals owned their own as they were expensive items, this meant that clocks in public spaces such as on churches were very important.

Harlesden in the 1880s was growing rapidly. We can see from records that the houses in All Souls Parish quadrupled between 1881 and 1891. People had been moving to the area for work, especially on the railways and because of the new cheap houses being built. Many workers came from Ireland to settle in Harlesden because of the 1840s famine in Ireland. Harlesden continued to be a place where many came to find work and to settle.

As Harlesden grew the community discussed the idea for a public clock, to help local people and shop owners tell the time. Local newspapers of the time record talk of the plan in 1885 and there were newspaper articles written, asking the local council for updates.

When the plans got under way, it was decided to build the clock in time to celebrate Queen Victoria’s ‘Golden Jubilee’ (fifty years on the throne), in 1887. There are lots of ‘Jubilee clocks’ around the United Kingdom in celebration. However, Harlesden Jubilee Clock was finished and installed (or put in place) in 1888, one year later.

The makers of the clock were ‘Stevens Bros. of Upper Thames Street and Glasgow’. The plans were displayed in Dell’s, a local clockmaker, on the High Street in Harlesden. Dell’s helped to repair the internal clock mechanism in later years.

As a landmark in Harlesden, the clock has remained at the same junction over many years, witnessing many different events and activities in Harlesden.

When did a marathon run past the Jubilee Clock?

In 1908 the Olympic Marathon passed through Harlesden. This photo shows Pietro Dorando, the first across the finish line, running through Harlesden surrounded by large crowds lining the streets.

According to the rules of the marathon, Dorando actually did not win the race, as he collapsed just before the finish line and had to be helped over it by others, but he was still celebrated at the time for his great achievement.

What transport has run past the Jubilee Clock?

In the photograph of Dorando you can see the tram lines on the road. In 1888, Harlesden became the first area in northwest London to have horse-drawn trams. By 1890, there was a horse-drawn bus every five minutes from Paddington to Harlesden and one every 12 minutes from Harlesden to Charing Cross.

In 1907, electric trams, powered by overhead wires, came to Harlesden, improving an already excellent public transport system. By 1910, trams were travelling regularly through Harlesden by the Jubilee clock. Trams continued throughout the first half of the 20th century, but were discontinued in the early 1960s.

This photograph from 1959, shows the tram wires not long before they were discontinued in the early 1960s.

From the 1960s, buses continued to serve Harlesden and the ‘Jubilee Clock’ bus stop continues to be one of the most popular stops in Harlesden to this day.

Has the clock changed over time?

The clock has changed a little bit since it was first installed. In the beginning, there were four lamps attached with curved arms, at the sides of the clock. There was also a weather-vane on top. A weather-vane is a metal arrow, which moves with the wind. It shows you the direction the wind is blowing, with the letters ‘N,’ ‘S,’ ‘E,’ ‘W,’ marking directions for ‘North, South, East and West’. 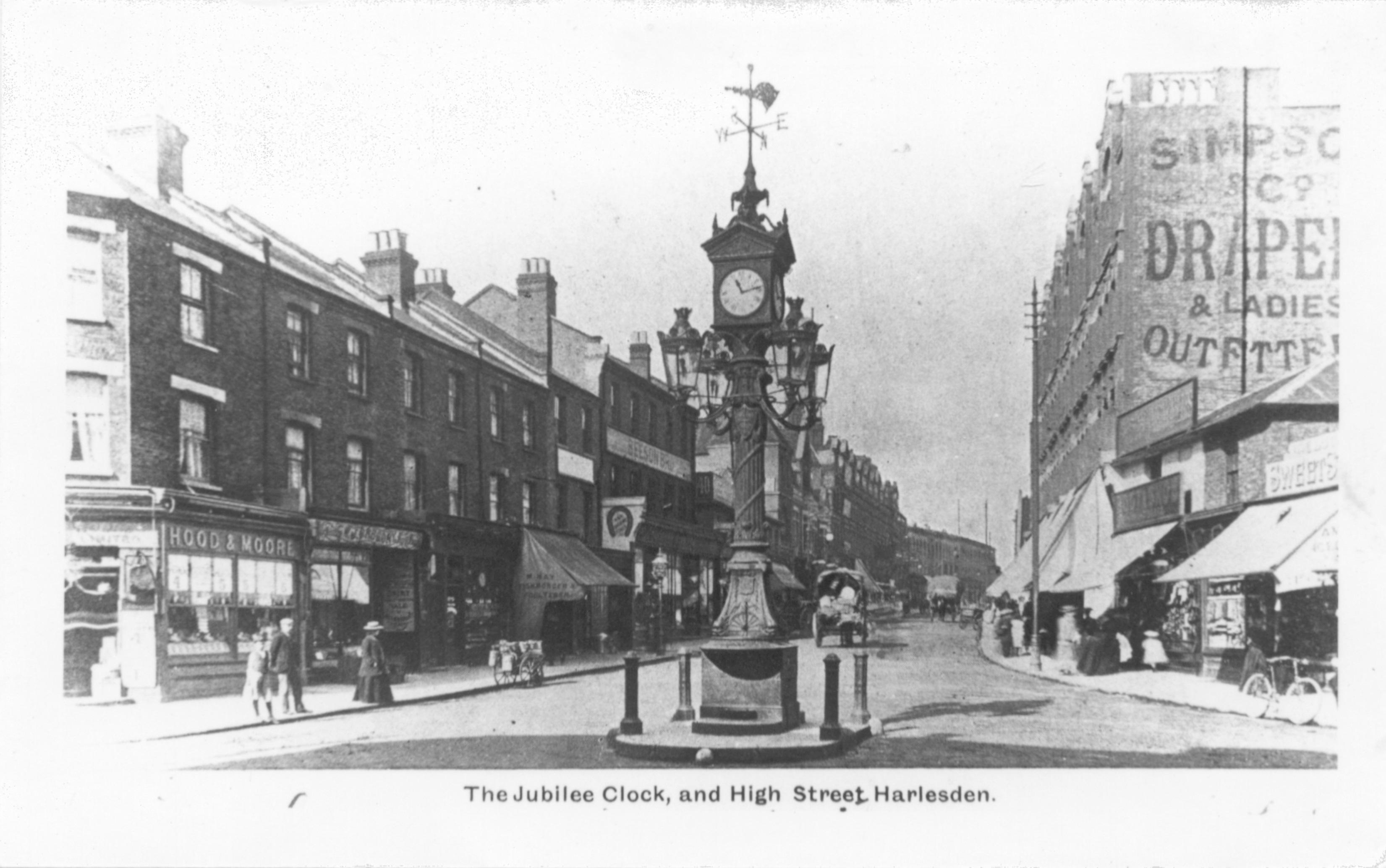 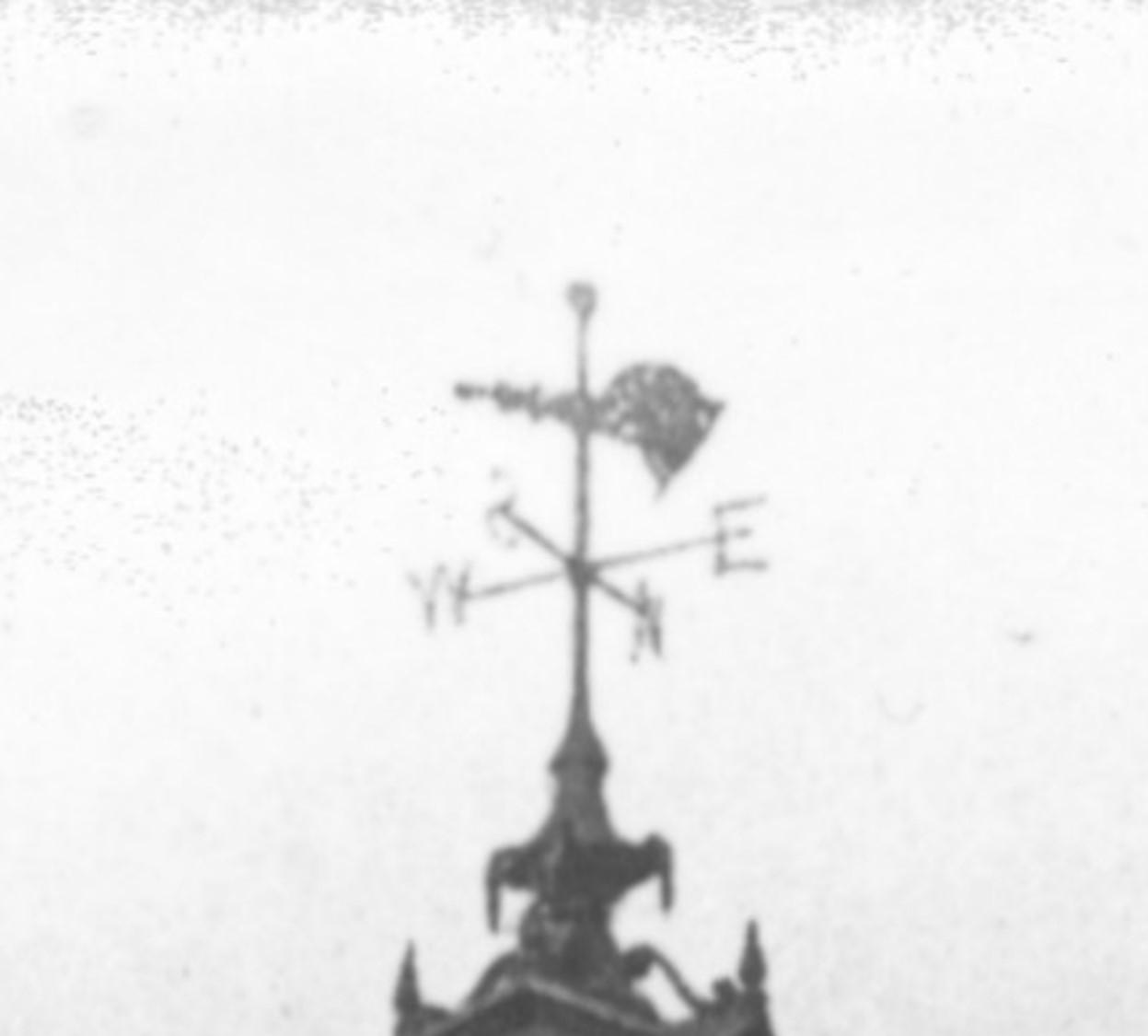 Left: Details from the postcard showing the ‘weather-vane’.
Right: Detail showing the lamps

As motor cars became more affordable, traffic in Harlesden got busier. Some local people wanted to remove the clock to make more space for cars passing on the High Street. But other people campaigned strongly to keep the clock, arguing it was still an important local landmark. The clock helped people know when they had got to Harlesden, and it was used as a meeting point.

In 1938, the clock was moved a little bit to make more room for traffic. At this time the 4 lamps and arms on the side, and the weather vane were removed. Harlesden Jubilee Clock has remained at the same junction at the High Street, since 1888.

Here you can see the Jubilee Clock in 1963. You can see there are no more wires for trams, but the traffic on Harlesden High Street is very busy.

The bus stop today still uses the name ‘Jubilee Clock,’ and is one of the most well used bus stops in Harlesden.

A new lease of life

Thanks to Harry Brown of the Willesden Local History Society for his recent research on Harlesden Jubilee Clock.

Please also see Brent Museum and Archives webpages for more information on the history of Harlesden and Brent.